I study how crystals form, especially nucleation. Nucleation is the first step in the formation of a crystal, and so it determines whether a crystal can form at all, and if so how fast and how many crystals will form.

Experiments on crystallisation from solution

An experimental PhD student, Laurie Little (graduated 2017) worked with Joe Keddie and myself. We published a paper (arXiv) on the nucleation of competing crystal forms (polymorphs) of the molecule glycine. We showed that one crystal (the γ polymorph) nucleates mostly at early times, while the competing form (the α polymorph) starts off

slow but accelerates. These different time variations can be used to make the γ polymorph with high purity.

In 2014, I wrote a review of quantitative experimental data on nucleation at constant supersaturation, plus the models used to understand this data. It was published in CrystEngComm (open access). The review covers a few aspects of the nucleation of crystals, but looks in a fair amount of detail at observations that in some crystallising systems, the rate at which crystals form (nucleate) can vary by orders of magnitude between one droplet and another apparently identical droplet.

Crystallisation can be complex, here is nanocrystalline state, that forms as an intermediate in computer simulation studies of crystallisation of a simple model (Stillinger’s Gaussian Core Model). 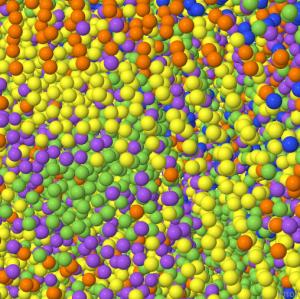 There is only type of (spherical) particle present, but the particles are coloured according to their local environment. Yellow, orange and green particles are all locally crystalline, but are in three different crystal lattices. Purple particles are at (mainly crystal/crystal interfaces). Yellow atoms are in locally face-centred (fcc) cubic environments, while orange atoms are hexagonal close packed (hcp) and green atoms are body-centred cubic (bcc). The blue atoms are disordered. As you can see the state is nanocrystalline in the sense that it is a mixture of nanoscale, i.e., very small, crystals of the three different crystal lattices.

Despite the local crystalline ordering, this structure scatters X-rays like a liquid. Our work on this state is described in a Communication in the ACS journal Crystal Growth & Design; preprint here.

The number of secondary-school age children infected with COVID-19 has tripled in a month, so is it time to abandon social distancing and masks?

How virus-containing droplets are made

Transmission of COVID-19 likely starts with production of a small droplet that contains one or more SARS-CoV-2 viruses. This occurs somewhere in the lungs, throat, or mouth of an infected person. We have almost no data on this process as it occurs inside the body of an infected person, but we do know how droplets […]