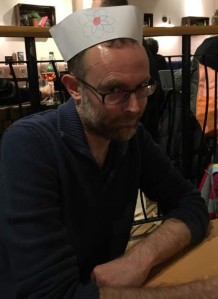 I grew up in South Wales, and then started my scientific career with a BSc in Chemical Physics (1992) followed by a PhD (1995) at the University of Sheffield (in the north of England). The PhD was with George Jackson (who is now at Imperial), and was mainly on calculations of liquid phase diagrams. From 1995 to 1997 I was a postdoc at AMOLF, a research institute in Amsterdam. I worked with Bela Mulder and Daan Frenkel (who is now at Cambridge). Then I spent one year in the sun at UCLA in Los Angeles, working for Bill Gelbart and Jim Heath (now at Caltech). This was on modelling the self-assembly of Jim’s metal nanoparticles at the water/air interface.

I was appointed here as Lecturer here in 1998, and I have been here ever since, although I am now a Reader, and so get paid a little more and have to go to more meetings. Over my years at Surrey my research has included work on crystallisation, i.e., how crystals nucleate and grow, and I also work on modelling the complex non-equilibrium processes that occur during paint drying and rubber-glove manufacture. Recent work has been mainly on understanding masks/face-coverings work, i.e., filter our potentially-virus-containing-particles from the air.

I have also worked on a number of areas of biological physics. These have including the evolution of protein interactions, cell signalling, and studies of phase separation in living cells.

As part of the EU funded RAMP network on membrane-protein crystallisation I am supervising Virginia Apostolopoulou’s PhD, who started October 2017.

Laurie Little did a PhD with Joe Keddie and I, between 2013 and 2017. His thesis is: A “Tortoise and the Hare” story: The relationship between induction time and polymorphism in glycine crystallisation. He started in October 2013, after graduating with a degree in Physics from Surrey.

Andrea Fortini worked with Joe Keddie and me on an FP7 project called BARRIER-PLUS, from 2014 to 2016. Andrea has a YouTube account with movies of his computer simulations. He is now a Visiting Researcher here.

James Mithen worked with me for a little less than three years (2012 to 2015) on EPSRC grant “Computer Simulation of the Thermal Epitaxial Nucleation of Crystals“. Case for Support for the grant here. James is now working in London.

Amanda Page worked with me on the computer simulation of nucleation. She submitted her thesis in 2010, and is now working at DSTL.

Teaching half the class

Last semester, teaching was on average about halfway back to normal, but for computing it was almost normal, apart from the masks, which weren’t a big deal. I think it went well. I introduced a little warm-up introductory informal lecture at the beginning. This was maybe 10 to at most 30 minutes in the computing […]

Today there was a COVID-19 press conference, with the Prime Minister Boris Johnson, and Sirs Chris Whitty and Patrick Valance. It is on YouTube. At about 38 minutes LBC’s Ben Kentish asked a couple of questions. Sir Chris Whitty gave what sounded to me like an excellent answer on vaccines, clear, authoritative, from the heart, […]